Here is a list ranking every Kingdom Hearts game from the worst game, to the absolute best game. This is the lowest ranked game in the list, and it is so for good reason. This game jumps the shark for the entire franchise, and many believe that the narrative of the KH series was salvageable before this game released.

DDD checks all of the ‘do-nots’ in writing. It throws in time travel, parallel versions of characters, multiple timelines, and frankly, none of it makes any sense.

But the story is not the only area where this game falls flat. It takes the command deck system from BBS and adds in Spirits, which are pocket monster like creatures that aid you in battle.

While cute, the leveling and making of spirits can be very tedious.

Of course, that is assuming you actually engage with the system instead of
using the unbalanced ‘Balloon’ strategies. For those of you who may be unaware, Balloon is a series of magical skills that do way too much damage with way too little of a cool down (the time it takes before you can recast).

The common answer is ‘just don’t use it’ but here is the thing: the difficulty of the game is so unbalanced that by not using the Balloon skills you are making the game shockingly more difficult.

Between that level of unbalance and the terrible narrative choice, this game is easily the worst game in the franchise. Assuming you did not emulate Chain of Memories onto your phone, this is the first official Kingdom Hearts mobile. Japan had a PC based version before it was released world line for mobile.

This game is…weird. It is a mobile game that has some MMO elements along with the ever growing Gacha systems in mobile RPGs.

While fun at first, as most Gacha games are, it soon become very grindy and tedious to keep up with if you are not entirely invested in it.

Story wise, it definitely over complicates the entire franchise.

The story within Union X, as far as we can tell, seems to have much to do with
future Kingdom Hearts releases rather than the current story through KH1-KH3.

It can be a fun time killer, but not much else. If I’m being honest, this title feels like straight filler. However, it is decently fun filler.

The aesthetic of a digital world with more appropriate, computer and code reskin of the command menu system from Birth By Sleep, is all pretty neat to look at and mess around in.

But this is definitely a title you play once or straight up skip.

It adds very little or (probably) nothing to the overall narrative of the series, and there are better Kingdom Hearts handheld experiences out there. First things first, that title is insane; it deserves all of the jokes.

Still, this game has a lot going for it, making it better than some of the
others in the series.

One big highlight: Birth By Sleep-A Fragmentary Passage brought back fan favorite character Aqua and gave her all the power next gen consoles could provide.

The combat was smooth and fun, the story filled in some interesting gaps in the series. Overall, it was a great appetizer for KH3. Go ahead, take a moment to let out all of the many jokes about the titling conventions of the Kingdom Hearts franchise.

Great, now we can talk about why this game is actually pretty good.

Easily the strongest part of this game is its story and characters.

The narrative of 358/2 Days repaints the entire context around Kingdom Hearts 2, allowing for a deeper understanding of that game.

The journey is likely one of the most (if not the most) emotional of the series, showcasing the great writing hidden behind the Disney and Final Fantasy characters.

Unfortunately, this game’s combat is one of the weaker of the series.

It tried to keep the original console games’ battle system, which did not translate to handheld very well, causing many notoriously annoying boss fights (watch out for Neverland).

It did bring the first multiplayer experience to the series, with over a dozen
playable characters, so that’s a plus. As the long-awaited true successor to KH2, this game had a lot to live up to.

In its defense, there was no way, no matter what Square Enix produced, that this game was going to live up to the hype.

However, that does not make it a bad game, far from it actually.

The combat system is a closer feel to that of KH2 while maintaining some of the more fun aspects from the spin-off titles (shotlocks, for example).

Unfortunately, while this game is rather fun to play, the narrative conclusion it brings is rather weak.

This game feels much more like a set up for whatever comes next in the Kingdom Hearts franchise, rather than a conclusion to the already existing story. While these games are seen as a bit of a black sheep among the Kingdom Hearts fanbase due to its very strange card-based battle system, they brought some really great things to the table.

The original release on the Gameboy Advance was one of the earliest
handheld KH experiences, complete with pixel-based graphics that give this game a unique feel.

Of course, in the re-release they updated it to PS2 era graphics but left the
gameplay untouched.

The card-based system can be confusing at first, but with a little time it becomes second nature and allows for deck-based strategies that many find fun.

Not to mention it was the first in the series to have two playable characters (Sora and Riku) with different stories, skills, and mechanics.

This game was innovative, and for that, it is definitely worth a try. Here is where the notoriously convoluted and deep Kingdom Hearts lore begins to truly show up.

Birth By Sleep introduces another trio of characters (Aqua, Ventus, and
Terra) and gives fans the first proper introduction to the series big baddie: Xehanort!

While being a departure from the main series in terms of some mechanics, the new introductions were a nice change of pace.

The command menu brought a new flavor to battle and allowed for a deeper level of engagement through leveling and creating new and different commands.

There were also 3 playable characters, each with unique yet overlapping stories allowing for hours and hours of interesting game play. The game that started it all!

Born to be a creative competitor to Super Mario RPG, Kingdom Hearts rose to the challenge.

It brought together tons of recognizable Disney character and created nearly a dozen different worlds to fight in and explore.

While some of its mechanics can feel a little sluggish at times, such as combat or Gumi missions, what it loses in technical prowess it easily makes up for with its extremely cohesive narrative and charm that none of the other titles can quite capture. 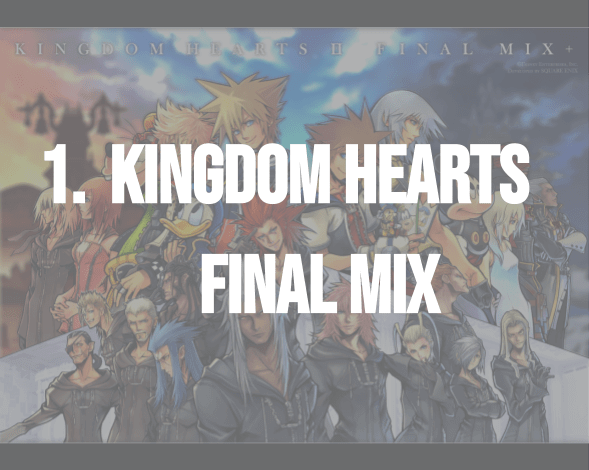 A surprise to very few, KH2FM is easily the best game of the entire series.

It takes all of the things we loved about the first Kingdom Hearts game and polishes them up to a near masterpiece.

The narrative is engaging and keeps you guessing all the way through, and the combat has been cleaned up to feel the best it has ever been (and so far,
ever will be) in the Kingdom Hearts series.

This game is the pinnacle of Kingdom Hearts.