When beginning your League of Legends chronicles, indecision plagues most new players and even older ones. With limited Blue Essence (free currency to buy champions) and the vast expanse of champions, when you buy a champion you need to know you have made the correct choice. This article is your beacon in the darkness of hesitation. Here are the top 10 best champions for beginners in League of Legends to sink their teeth into. No League of Legends player can honestly say they have not once played Garen.

If there was a poll on the easiest champion to play and master, it would be  Garen hands down.

This leader of the vanguard is a one-dimensional champion with few mechanics involved.

You run up to your enemy, bash them with your giant greatsword, Beyblade them nearly to death, and finish them with a heaven-rending sword of
light.

“Spin to win” is Garen’s motto. A permanent resident of the middle lane (mid), Annie uses fire magic to incinerate her enemies after which she mocks them in her gratingly immature voice.

So if you enjoy watching your enemies explode while hopping and skipping to victory, you will want to pick up this monstrosity under the façade of a sweet little girl. Being the closest thing League of Legends has to resemble a sword martial artist, Master Yi is an infamous champion among newer players.

Armed with supersonic speed, hands that move faster than lighting, and the ability to disappear while destroying enemies, Master Yi is a force to be reckoned with.

This Wuju master is one of the few champions that can single-handedly destroy the enemy team.

That is impressive considering there are 148 champions in League of Legends and less than 10 have that kind of track record.

If you are a fan of the DC hero the Flash and enjoy filleting the enemy into sushi, Master Yi is an optimal choice. Love her or hate her, this banana wielding unicorn girl has been a part of League of Legends since the beginning.

As part of League’s original 40 champions, Soraka has weathered storms most champions have not even been there to see.

Labeled the healing bot of League for her seemingly excessive and endless amounts of healing, Soraka is arguably the best healing support champion in the game.

Players who enjoy keeping their muddleheaded team alive and enraging the enemy team to the point of insanity will love this champion. Easily the simplest Attack Damage Carry (ADC) in the game, and she is great at all levels of play; so, you will not have to worry about her becoming
obsolete.

She can shoot many at once, shoot ice shards, or even a gigantic ice arrow that no one in the entire game can hide from.

Ashe is her name and freezing enemies is her game. It’s a bird, it’s plane, no-it’s Jax spinning his lamppost while leaping at you.

Jax’s title is the grandmaster at arms.

What does this mean exactly?

It means he can slap anyone to death with a stick, put simply.

Catering to impatient players who just want to fight, Jax is an exceptional champion when it comes to fighting.

He can dodge punches and bullets and pummel anything in arms distance.

With deceptive precision and unmatched violence, Jax is a great pick-up for beginners and can be played almost anywhere. Lux has a copious amount of reskins and is greatly adored by the female
LoL community.

Lux is a mage that wields light magic to bind, slow and blast enemies to oblivion.

As Garen’s sister, it was her birthright to make it to this list as well because only a monster would separate siblings.

If you enjoy deleting unsightly enemies from your screen and bringing assassin players to tears, Lux will light the way to triumph. Raised from a piled of corpses as a gladiator, Xin Zhao is an eminent jungler with a nearly unrivaled early-game in the jungle.

Famous for his high damage per second (DPS), Xin Zhao is great at dueling and taking objectives.

While diving into the enemy team and flinging them aside with the swing of his spear, he chases down his targets and impales them as they run
futilely.

If you enjoy turning the well-organized enemy team formation into a motley crew, Xin Zhao is an attractive prospect. The queen of shackles herself, Morgana is a fallen angel that wishes to drag others down to depravity with her.

With one of the longest duration crowd-control (CC) abilities in the game, Morgana frequently drains enemy players of their will to live.

Throw in another CC ability and you can forcefully make your enemies go AFK for five seconds.

Armed with a black shield that grants immunity to the injustice she dishes out (CC immunity), and the ability to place scorched earth where she pleases, Morgana is a snug fit for sadistic players who want to ruin someone’s day. 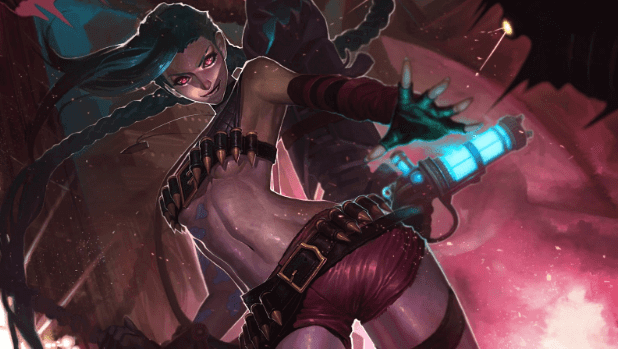 Crazy, untamed, adventurous, and mischievous, Jinx is a blue-headed lunatic that got a hold of some serious firepower and is all too willing to wreak havoc with it.

Like Ashe, Jinx is a bottom lane hyper carry (super strong late game) and as easy to play as they come.

Equip with a rocket launcher, heavy machine gun, dinosaur grenades, and a FREAKIN’ NUCLEAR MISSILE, Jinx can devastate a team at record times.

When she kills one person, she gets excited and kills others faster; that is the kind of psychopath we are dealing with.

If you feel your sanity is slipping from your fingers and you want to create a little chaos, Jinx’s asylum is always open for the deranged.

Each champion has their strengths and weaknesses which will not always be apparent to the untrained eye.

This was an attempt to lock into the strengths of these champions as well is their appeals to newer players.

The journey of 1000 miles begins with the first step; allow these champions to take that difficult first step with you.

With a little practice, you will find your enemies groveling at your feet.

It is not every day that you see a sasquatch frolicking about, much less with a tiny boy clinging to his head.

This unassuming duo use the power of  friendship to bury their enemies under a pile of snow.

Nunu & Willump are great for players who want to dip their toe in
the water of the jungle role.

The embodiment of terror, Fiddlesticks is a scarecrow gone too far.

Dating back before dates, Fiddlesticks is a legend in every sense of the word.

Recently the emperor of terror has gotten some new clothes, Riot Games has blessed this champion with a stunning rework.

If you find killing jungle monsters a strain, clearing the jungle with Fiddlesticks will be a breeze.

With a far-reaching scythe, a face that strikes instant fear into any man, and a storm of crows to pick apart your enemy, Fiddlesticks leaves teams running in the other direction.

Can you smell what the Rock is cooking?

Probably not, but you will feel his entire body smash into your team.

Malphite is a living rock that runs around clumsily as if he has no brain; he probably does not.

This makes it even more frustrating when he tramples you with his subhuman IQ.

Malphite is a tanky damage soaker with an astonishingly effective way to disrupt the enemy team.

Have you ever felt like you are unable to impact the game enough on your own?

Malphite has one of the most iconic game-changing ultimates in the game.

You are on a roof peering down at a bank that is amid a robbery.

The police have the place surrounded and in a desperate attempt to get out of the situation, the robber takes a female hostage and threatens cut her neck asunder.

The increasingly aggressive robber is about to slit the poor woman’s throat when you rest your head on the sniper, look through the scope, let out a deep breath, and pull the trigger.

As Riot Games’ first attempt at fulfilling the sniper fantasy in League of Legends, Caitlyn is a long-ranged ADC that deals tons of damage.

With a considerable range between you and the enemy, Caitlyn can snipe targets from a few screens away to secure a kill.

If you enjoy the thought of killing enemies from a distance, the Piltover cop Caitlyn should be your first choice.