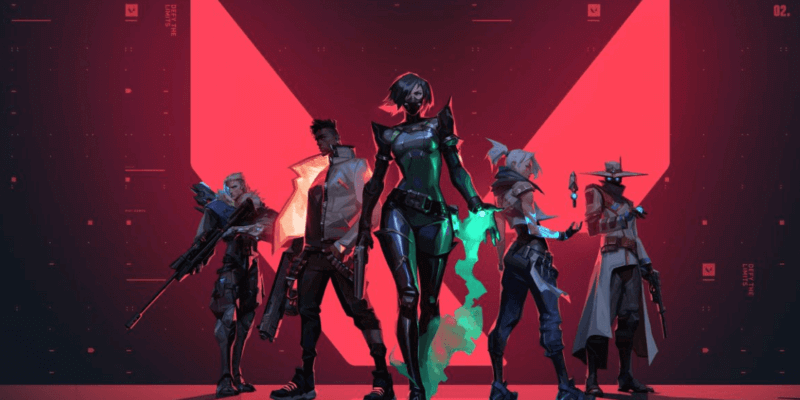 Valorant is an FPS that focuses on strategic plays more than any other with the usage and limitations of abilities. Under those limitations, you have the ability to create incredible plays with Valorant’s many Agents. But how do you know which Agent is for you? Whether you enjoy snooping around sneakily, barging right through the door, bombing the opposition to dregs, or strengthening yourself with the blood of enemies, there are Agents to cover each playstyle. We’ll give you a rundown of the Agents, their abilities, and their general play styles.

There are 11 Agents as of this writing; each with four unique abilities: two consumable abilities, one signature ability, and one ultimate ability. 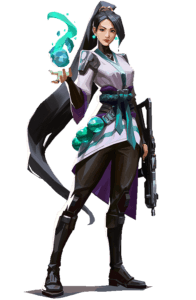 Sage is a Chinese chica with a knack for building walls and healing hurt allies; she’s the backbone of every team. Hailing from the Northern hemisphere, Sage is the connoisseur of creating opportunities for her team. Her ability to control critical terrain and obstruct the enemy is unmatched, for now. Sage is a Sentinel that transcends other agents at securing important positions and healing allies.

Barrier Orb (One Charge)
Sage creates an ice wall that blocks enemies, vision, and some abilities.

Healing Orb (Signature)
Sage uses a ball of ice to heal an ally or herself.

Resurrection (Ultimate)
Sage sways her hands in the direction of a fallen ally to revive them. Jett is basically a ninja from South Korea that loves lunging knives at newcomers. Her abilities all embody elusiveness, speed, and agility. Jett’s fast-paced playstyle is perfect for fragging. That is why she is a Duelist that excels at duking it out with the enemy team.

Cloudburst (Three Charges)
Jett throws a ball of mist that expands to create a spinning cloud.

Updraft (Two Charges)
Jett utilizes the power of the wind to propel herself up into the air.

Tailwind (Signature)
Jet uses the air to accelerate in any direction with extreme speed.

Blade Storm (Ultimate)
Jett pulls out a set of deadly wind propelled knives to throw, striking enemies of any distance. 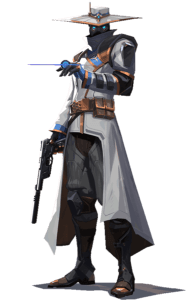 Cypher is a seeker of secrets from Morocco. He’s an information broker that always exceeds expectations with the amount of intel he can gather. Cypher’s gameplay revolves around leaving no enemy unnoticed. He sets up cameras, traps, and smoke screens all for the purpose of prying into enemy movement. Cypher is a Sentinel that searches for the trail of enemies with a collected calm.

Cyber Cage (Two Charges)
Cypher deploys a projector that displays a cage that gives audio cues and slows when enemies pass through.

Trapwire (Two Charges)
Cypher sets up a redeployable tripwire that alerts him and his team of an enemy’s position. If the trap is not destroyed by the enemy after tripping it, the Trapwire will send their senses into a stupor.

Spycam (Signature)
Cypher throws a redeployable camera that alerts you of enemies. You can reactivate this skill to look through the camera and tag enemies with a tracking dart.

Neural Theft (Ultimate)
Cypher inspects the fresh corpse of an enemy to expose the whereabouts of the remainder of the enemy team that’s alive. 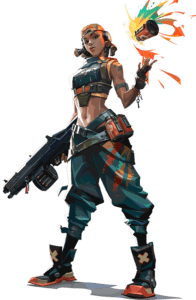 Raze is a bomb loving broad from Brazil. Her obsession with explosions is apparent by every single ability bringing a boom of some sort. Enemies that like to lump together are bound to be brought to their knees by a good Raze player. She excels at clearing risky enclosures, vaulting over obstacles, and well, razing things to the ground with enough firepower to shake your screen. Raze is a demolition Duelist with tons of damage to dish out onto the enemy team.

Blast Pack (Two Charges)
Raze throws a sticky satchel that can be detonated remotely. This can be used to propel her or to damage enemies.

Boom Bot (One Charge)
Raze deploys a bot that goes randomly searching for enemies in the direction you deploy it in. If it finds an enemy, it will run up to them in a frenzy and explode in their face.

Show Stopper (Ultimate)
Raze equips a rocket launcher that ravages enemies in tight spaces. You can fire the rocket to do massive area of effect damage. 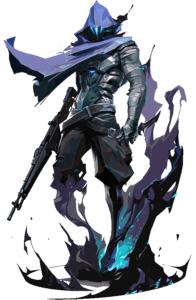 Omen is an ominous creature that crawled out of someone’s imagination. If you play Fortnite, you may recognize this hooded hooligan. His abilities are just as elusive as his identity. He’s good at denying vision, disorienting the enemy team, and teleporting wherever he finds convenient. Omen is a Controller that can throw the enemy team into chaos with his evasive silhouette.

Shrouded Step (Two Charges)
After a delay, Omen teleports to the position you place the marker within a short range.

Paranoia (One Charge)
Omen fires a swirl of dark matter that reduces the enemy’s vision range.

From the Shadows (Ultimate)
Omen can teleport to any part of the map he pleases after a few seconds of delay. This ability can be canceled midway if you have been teleported to an unfavorable position. 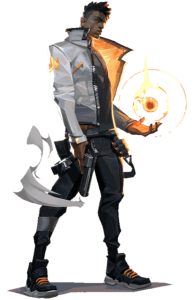 Phoenix is our fiery friend from the UK. He’s a mischievous man with a love for fire. Phoenix hurls out balls of hurt with fire flashbangs and flaming grenades that ignite the floor. It is no surprise that Phoenix’s entire kit revolves around flames. Fire isn’t only an element of destruction, but also an element of life. Phoenix is a Duelist that dares to rush right into the heart of the enemy team because he has extra lives to spare.

Curve Ball (Two Charges)
Phoenix flicks a fire flare that can turn corners. The flare blinds enemies and allies that look at it.

Blaze (One Charge)
Phoenix creates a wall of flame that obstructs vision and heals himself.

Hot Hands (Signature)
Phoenix hurls a hot flame that creates a zone that deals damage to anyone that steps in it and heals him.

Run it Back (Ultimate)
Phoenix places a marker at a location and starts a timer. If Phoenix dies while this timer is active or the timer runs out, he will revive at the marked location with full health. 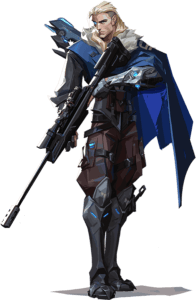 Sova is a scout from the stinging cold of Russia. He hunts with ruthless precision and pierces foes with a bow and arrow. Sova can scope out sketchy situations with his owl drone, seek out sneaky enemies with his recon bolt, and snuff them out with an exploding shock dart. When enemies think they’re out of reach, he pierces through the terrain with an all-encompassing piercing light arrow and rips them apart. Sova is an Initiator that sets up fights with inside enemy intel while firing a flurry of arrows.

Owl Drone (One Charge)
Sova sends out an Owl Drone with a camera that you can control. You can mark enemies with a tracking dark and recon dangerous angles with it. After a few seconds, the drone disappears.

Shock Bolt (Two Charges)
Sova shoots an arrow that explodes in an electrical field. The damage of the arrow depends on the distance from which it was shot. These arrows can be made to bounce up to two times by right clicking.

Recon Bolt (Signature)
Sova fires a radar arrow that reveals enemies that the radar wave comes into contact with. These arrows can be made to bounce up to two times by right clicking.

Hunter’s Fury (Ultimate)
Sova shoots three long-range energy blasts with his bow that can pierce through walls. When an enemy is hit with the arrow, they take massive damage and are revealed for a short duration. 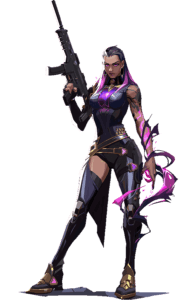 Reyna is a mercenary from Mexico that thrives off the thrill of a bloody battle. She devours the souls of dead enemies to strengthen herself and blinds those who dare look her in the eye. A Reyna with the skill get to kills is a fearsome foe that can have half a foot in the grave and still set up a slaughter. Reyna is the Duelist class poster child that benefits the most from heads popping and bodies dropping.

Leer (Two Charges)
Reyna throws out an eyeball that makes enemies that look at it short-sighted, unable to see past the eye.

Devour (Four Shared Charges with Dismiss)
Reyna siphons a soul orb from an enemy she has killed to heal herself.

Dismiss (Four Shared Charges with Devour)
Reyna absorbs a soul orb from an enemy she has killed to become invulnerable for a short duration.

Empress (Ultimate)
Reyna is given a battle steroid with faster firing and reloading, increased speed, and enhanced abilities. Devour is automatically activated when an enemy is killed, and Dismiss makes Reyna invisible and invincible for a short duration. 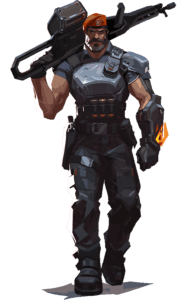 Brimstone is a bearded commando from the United States. He’s equipped with high-tech logistic gear to guide his team to victory. Brimstone supports teams in a different way than Sage does; he creates fighting fields that give enhanced battle stats like speedy reloads. He can give smoke cover from any corner of the map, and clear out enemies with a satellite laser strike from space. Brimstone is a Controller that uses his advanced tech to make the enemy team dance to his tune like marionettes.

Incendiary (One Charge)
Brimstone fires a grenade launcher which shoots grenades that set the floor aflame.

Sky Smoke (Three Charges (Signature))
Brimstone uses the map on his wrist module to deploy up three smoke covers in any area he chooses.

Orbital Strike (Ultimate)
Brimstone communicates with a satellite from his wrist map module to coordinate a laser airstrike at any place he chooses. 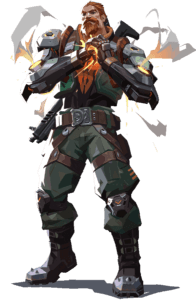 Breach is a strapping middle-aged bionic stud from Sweden. He excels at leaving opponents stunned by his high-frequency seismic shockwaves. Breach is great at using brute force to break through secure enemy strongholds. His abilities all sabotage enemy senses; this confusion can lead to catastrophic consequences for the enemy team. Breach is an Initiator that engages fights with the enemy on their own turf.

Fault Line (Two Charges)
Breach disorients enemies in a straight line, shaking them into a stupor for a few seconds.

Aftershock (Signature)
Breach blast a big light canon from his mechanical arm. After a delay, it deals devastating damage in a line.

Rolling Thunder (Ultimate)
Breach breaks open the floor with an enormous seismic wave, knocking up and stunning enemies left in its wake. Viper is an American chemist clad in a toxin emitting suit. She’s a notorious Agent known for toxic spills with a noxious agenda. Viper’s playstyle consists of manipulating, obstructing, and playing with enemy vision. She decays enemy armor and health with her deadly poison. Her abilities all revolve around taking advantage of toxins to weaken enemies into a feeble form that’s ripe for the killing. Viper is a Controller that uses chemicals to cripple the enemy team.

Poison Cloud (One Charge)
Viper throws a redeployable poisonous smoke cloud that can be toggled on and off at the cost of toxic fuel.

Snake Bite (Two Charges)
Viper launches a chemical flask that corrodes and slows the enemies within its field.

Toxic Screen (Signature)
Viper deploys gas emitters to spread in a straight line. These emitters can then be togged on and off at the cost of toxic fuel.

Viper’s Pit (Ultimate)
Viper plunges her surroundings into a toxic wasteland. Her vision is enhanced, while enemy vision is reduced. All the while, the poisonous field whittles away at their health and armor.