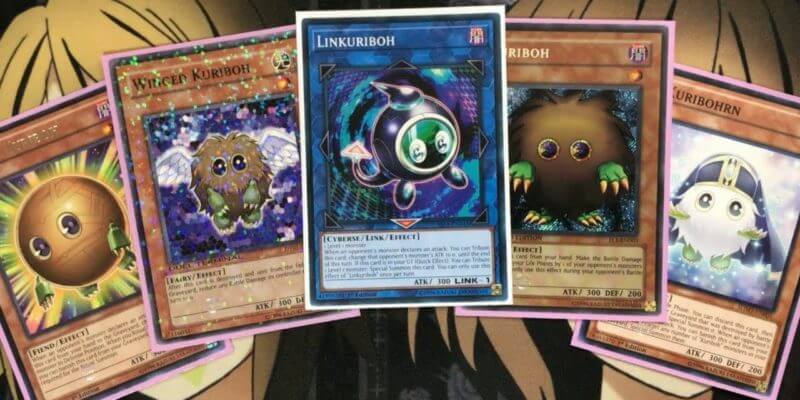 There are a variety of cards in Yugioh you can add to your Kuriboh Deck. Kuriboh, the little Pokemon-like furball, is an archetype of monsters widely known in the Yugioh franchise. Kuriboh monster cards are weak in defence, but they’re still a fun deck to build from your spare cards. Nevertheless, the archetype has received several upgrades over the years.

Kuriboh is the first classic monster card and a card which shouldn’t miss in your Kuriboh deck. It has an ATK of 300 points and a DEF of 200. These low stats qualify him for various supporting effects like Allure of Darkness. It has the power to reduce damage from an incoming attack to zero. You can discard this card during your opponent’s turn and take zero damage. It is a quick effect that you can use to save yourself from battle damage.

Introduced as Jaden Yuki/Judai Yuki, Winged Kuriboh has an ATK of 300 points and a DEF of 200. When sent to the graveyard, it reduces the battle damage taken by its duelist to zero. It eliminates all future battle damage you’ll take for that turn. For this to occur, you must first field it. At base level, this card has the same effect as Kuriboh, but Winged Kuriboh’s effect only kicks in once the card is sent to the graveyard. The only downside of this card is that most opponents can easily predict its move.

This card can’t be special summoned without a specific spell is cast. You can only normal summon it with the effect of Transcendent Wings. It has low ATK and DEF points, but it can tribute itself during your opponent’s battle phase and destroy all opposing monsters controlled by your opponent. Moreover, it inflicts damage to your opponent equal to their ATK combined. As a result, your opponent’s life points and monsters on the field are devastated hence making you the winner of the duel. You can use Transcendent Wings to pull Winged Kuriboh LV10 from your hand and activate it at quick-play speed, thus catching your opponent off-guard.

Scapeghost is a zombie type monster used specifically for tokens. It is a level 1 tuner whose effect is used to summon up to 4 tokens once it is flipped. This gives you the power to special summon a number of Black Sheep Tokens to your side of the field. You can combine these tokens with other cards for amazing strategies. Tokens and Kuribons are similar; hence you should at least have one of these cards in your Kuriboh deck.

You can play this card effectively once you summon tokens from Scapeghost. Thereafter, you can destroy all the tokens on your side and then proceed to destroy the same number of cards on the field. In simple terms, if you destroy four tokens, you’re able to destroy four cards of your choice on the field. It works perfectly with cards such as Scapeghost that bring out its amazing effects.

This magic card has the power to bypass boss monster immunity effects because, unlike other cards, it doesn’t target. As a result, once activated, it gives you an upper hand against your opponent. Once this card is activated, both duelists must exchange one monster card that they control with their opponent. This means that you can even summon a level 1 monster and give him to your opponent. On the other hand, it can create a dead draw in the event where your opponent has many monsters on the field.

You can summon this link monster using any level 1 monster or token from your extra deck. It has a low 300 ATK but can tribute an opposing monster and change its ATK to 0 for that turn. This not only protects your life points but damages your enemies. Once per turn, you can revive this card from the graveyard by tributing any level 1 monster that you control. This comes in handy when activating a quick play speed on any turn.

This card has both a light and fairy type monster; hence it can fit well in a variety of deck builds. You can discard this card on either turn to negate your opponent’s monster effect. Hence, acting as a barrier against common burn damage. However, it does not destroy your opponent’s card but only negates its effects. In the event that your opponent launches a direct attack, you can banish it to the graveyard and draw a card; then special summon that card as long as it is a monster. Therefore, you’ll have changed the attack target to the card you special summon.

Even though it is the card with the lowest stats on this list, its powerful effects make up for this. It has an attack prevention effect that can shut down even the strongest monsters in the game. Moreover, you can also revive it from the graveyard by special summoning it to prevent a direct attack. However, you’ll have to banish it once it leaves the field. You can equip this card and prevent the imminent attack from happening when your opponent declares an attack. Not only does this disable the attack, but it also prevents future attacks from happening and safeguards your life points.

This is a level one light attribute monster that has almost similar effects as the Monster Reborn spell card. You can send it from your hand to the graveyard at the end of the battle phase and target another monster in your graveyard then special summon it to the field. This prepares you well for a comeback as long as the revived monster was initially destroyed by battle. In the event that your monster declares an attack, you can banish Kuribohrn, and special summon any number of Kuriboh monster cards from your graveyard. You can end up with the right number of Kuribohs that will provide an astounding defence in the later stages of a duel.